The Nagorno-Karabakh Conflict in the Soviet and Russian Press

For a few brief weeks in fall 2020, Western media buzzed with news of the intense war in Nagorno-Karabakh, an Armenian-populated region that declared independence from Azerbaijan in 1991. The conflict had been “frozen” since 1994, so the new outbreak of violence caught many journalists unawares.

By contrast, this conflict has been a mainstay in the Soviet, then Russian press. The sheer volume of published material – including eyewitness accounts, interviews with notable figures, and incisive, well-researched analyses – far exceeds anything produced by Western media.

Moscow’s knowledge of the region is as strong as it is permanent, dictated mainly by geopolitical interests. The present collection of articles – carefully translated, edited, and culled from a vast repository of Russian-language press curated by East View – presents in book form for the first time in English some of the most important material that has appeared from 1988 to the present.

By bringing together this unique collection, East View Press aims to provide readers with the immediate context of the Nagorno-Karabakh conflict through the lens of Moscow, along with some insight into its complex historical, political and ethnic underpinnings. Black Garden Aflame will be of interest to specialists and general readers alike. 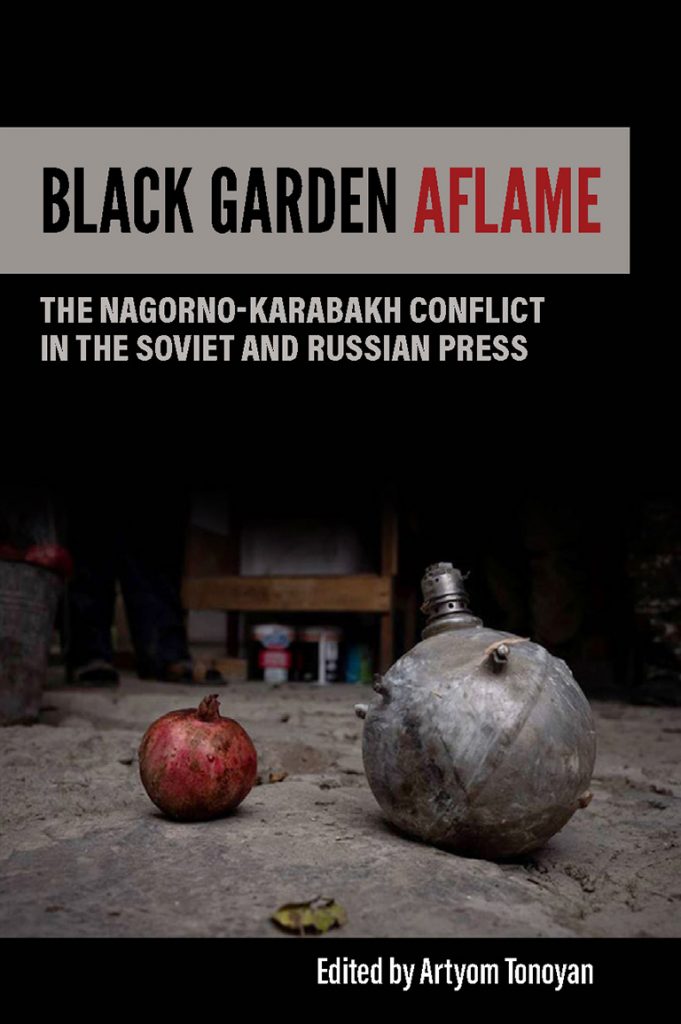 “This book presents an elegantly compiled work that is a worthy contribution to the field and will be useful for anyone interested in the Caucasus, the Nagorno-Karabakh conflict, post-Soviet states, and Russia’s foreign policy and decision-making process.”

“Black Garden Aflame’s unprecedented collection will be of significant benefit to researchers approaching the Nagorno-Karabakh conflict and the Soviet and Russian press from multiple angles. It provides evidence in the microcosm of one region of Perestroika’s impact on the press and on the USSR’s ability to maintain a viable state as it became more meaningfully federal. It offers rich detail on the individuals and events of the conflict from the indispensable perspective of the Soviet and Russian media which both reported on and shaped policy in the Kremlin. Its contribution lies in its accomplished translation and well-organized collation and editing of press material, making it an excellent resource for scholars interested in the region.”

“[A]lthough the Karabakh quandary has been subject to numerous studies and books, few have succeeded in addressing a key player in the ongoing Karabakh conflict and peace process – Russia. Dr. Artyom Tonoyan more than fills that void with his edited volume, Black Garden Aflame… The translations are solid, and Tonoyan’s introduction is both historically informed and borderline poetic. In fact, one might dare to say that his engaging prose alone is worth it! Indeed, as future historians and political analysts continue to explore the complexities and imbroglios of the Karabakh quandary, this volume, with its rich assortment of articles and analyses, will be essential for them in that regard.”

“This book adds to the not-so-populous library of … books on the origins, progress, and future of the Nagorno Karabakh conflict… by adding the most missing layer: the feel of how the most reputable Soviet and Russian media publications had been reporting on various key milestones in this conflict. … [A] great encyclopaedic resource for students, scholars, and decision-makers alike willing to understand the metamorphosis of this age-old inter-ethnic rivalry between Armenians and Azerbaijanis … Dr. Tonoyan’s impressive track record of research and vast knowledge in the Caucasus and Russia came to his own aid to exclude from the volume such publications that would show the appearance of so-called ‘paid content’ from any of the parties involved.”

“Despite its devastating human consequences, on the global stage the Karabakh conflict unfortunately remains obscure. Not so in the Russian-language press. This superb collection of articles translated from the Soviet and Russian press, covering the longue durée of this conflict from its onset in the late 1980s to the present day, will be an indispensable resource for anyone wishing to understand the longest-running conflict in Eurasia. The vivid and approachable translation brings to an English-speaking readership the shock and fury of the conflict’s outbreak in 1988, the inability of the broken Soviet system to contain it, the descent into war, the protracted ceasefire that followed, the multiple geopolitical interests in play and a catastrophic new war in 2020 – as reported in the pages of Pravda, Izvestia, Nezavisimaya gazeta and other papers by Soviet and Russia-based journalists who knew the conflict intimately. This collection should gain a wide readership among all observers of this conflict and those interested in Russian war reporting in Eurasia.”

“Tonoyan has painstakingly assembled a rich collection of primary sources from the Soviet and post-Soviet press on the roots, evolution, and bloody outcome of the Nagorno-Karabakh conflict. The result is a masterful piece of research that is now the go-to primary source for anyone who truly wants to understand the roots of the conflict in Nagorno-Karabakh.”

“To students of the Nagorno-Karabakh conflict, this unprecedented volume encompassing Soviet and Russian newspaper reports over more than three decades will no doubt become an indispensable resource. Its clear thematic organization, and combination of comprehensiveness with relevant focus provides a much-needed, readily accessible overview of the evolving media narratives in the Moscow press. A must-have for every Caucasus scholar and analyst.”

“This indispensable collection of articles, documents, and interviews from the Soviet and Russian press brings alive the events and emotions of one of the most tragic conflicts that brought down the USSR. The Karabakh struggle was a test of Mikhail Gorbachev’s perestroika, a test that the Soviet Union failed, and the result was the breakup of the largest state on the globe. Soviet nationality policy had long proclaimed its success in forging ‘Friendship of the Peoples,’ but these pages expose the fissures and failures of a bold attempt to manage, even solve, the problem of diverse nationalities coexisting in a single state.”

War in Syria
Countdown to War in Georgia
International Affairs