Maps of the Battleground of Gallipoli (Gelibolu) and the Dardanelles

Maps of the Battleground of Gallipoli (Gelibolu) and the Dardanelles: A Turkish View provides a rich guide to the maps of the 1915 Gallipoli Campaign theater and its environs. This book traces the strategic importance and cartographic history of Gallipoli and the Dardanelles back to antiquity, before focusing on the maps made by both the Allies and Central Powers in preparation for, during, and after the Gallipoli Campaign. Includes numerous color illustrations and photos, as well as maps printed in color in their entirety, many of which may not have been seen previously by English-language readers. Available in hardcover and softcover. 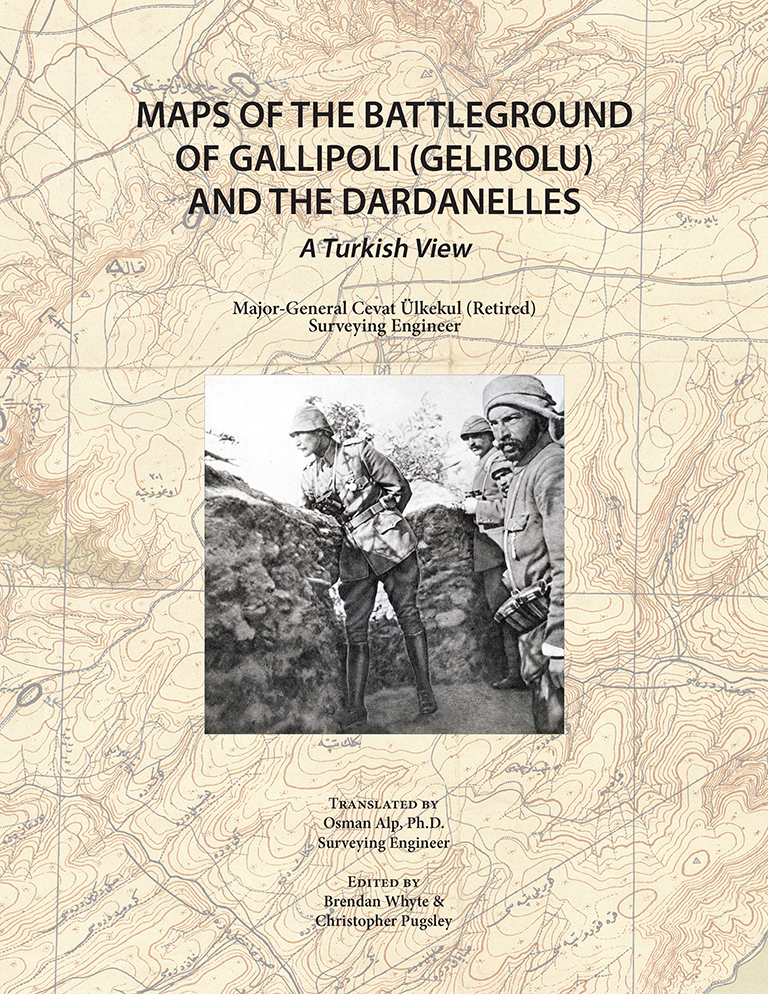 Format
Maps of the Battleground of Gallipoli (Gelibolu) and the Dardanelles

Introduction: The Dardanelles and the Golden Gate

World War I and the Dardanelles
– Mapping of the Gallipoli Theater by Britain and France Before the Landings
– 1:40,000 Maps Signed by Mustafa Kemal

Maps Produced in the Period Leading Up to the Gallipoli Campaign

Map Production Before and During the Gallipoli Campaign (1913-1915)

British and French Mapping During the Gallipoli Campaign
– How Did the Allied Powers Capture Our 1:25,000 Maps?

To the Martyrs of Gallipoli

Author Major-General Cevat Ülkekul (ret.) graduated from the Turkish Military Academy in 1950, received a BSc Degree from the Higher Technical School of Surveying in 1953, and became a surveying engineer. In 1962, he graduated from the Faculty of Law at Ankara University. He was promoted to Brigadier-General in 1981 and to Major-General in 1986. Throughout his service, he has worked at the Turkish General Command of Mapping in a variety of technical and administrative positions. He has published 16 books—three in Turkish and English; two in Turkish, English and French; and the remaining in Turkish. He has published more than 30 articles in a variety of journals, one of which was published abroad. The author’s research has focused on Turkish cartography, cartography of the world, and the history of Turkish maritime mapping, with a strong focus on Piri Reis, a famous sailor, geographer and cartographer.

Translator Colonel Osman Alp, Ph.D. graduated from the Turkish Military Academy in 1985 and from the Higher Technical School of Surveying in 1987, where he received a BSc degree and graduated as a surveying engineer. After graduation, he began working in the Department of Geodesy (his specialty) at the General Command of Mapping. He received his Master’s and Ph.D. degrees in Geodesy from Istanbul Technical University in 1993 and 1998, respectively. He also earned a Master’s degree in European Union Law from the Faculty of Law at Selçuk University in 2007. Throughout his service, he has worked at various departments of the General Command of Mapping, the National Mapping Agency for Turkey. He has also taught surveying courses at the Higher Technical School of Surveying, Gazi University, and the Middle East Technical University.

Editor Brendan Whyte completed a doctorate in political geography at the University of Melbourne, and is currently Assistant Curator of Maps at the National Library of Australia, where he pursues research interests in transportation, cartographic and military history.

Editor Christopher Pugsley has authored/edited 19 books. A former Senior Lecturer in War Studies at the Royal Military Academy Sandhurst, he is an Adjunct Professor in the School of Humanities, University of Canterbury; a Distinguished Alumni of the University of Waikato and Fellow of the Royal Historical Society. He is a Vice President of the Western Front Association and was appointed an officer in the New Zealand Order of Merit in 2015.